by Gregg Paul
If you have ever seen one of Comedy Central’s celebrity roasts, you’ll understand the premise behind the Roast of Mike “Lumpy” Lemke. While the so-called expert roast masters like Jeff Ross or Lisa Lampanelli were not on hand, the dais was full of Lumpy’s friends who were more than willing to try their hand at insult comedy.

“I am more of the Greg Giraldo type,” said Brad JJ Mueller. “Stick around, this is going to be  awesome!”

Mueller was referring to the late comic who was another of the infamous celebrity roasters. 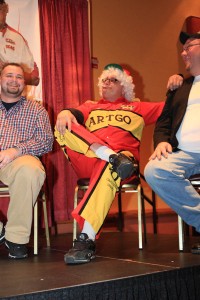 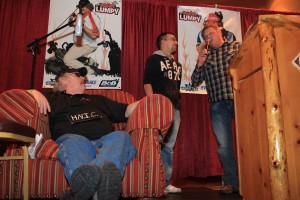 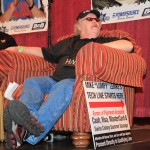 Mueller was just one of the roasters waiting for his chance to take his shots at Lemke. Also on hand were fellow race drivers Jeff Storm, Dan Fredrickson, and Jerry Wood. State Park Speedway’s Curt Keene joined master of ceremonies Andrew Bartelt as those present on the stage.

The purpose of the roast was to raise money for the MACC Fund, Midwest Athletes Against Childhood Cancer. It was also a precursor to the ARCA Midwest Tour banquet celebrating the 2012 racing season. B&B Race Engines along with Powersource Race Engines sponsored the evening’s festivities.

One by one the roasters got up to take their shots at Lumpy. However just like the many other celebrity roasts, each man took their shots at everyone else on stage as well. No subject was taboo or off limits. The humor ranged from being somewhat civil to downright blue and nasty. Yet the crowd of well over one hundred strong seemingly had an enjoyable evening.

Now being that this is a family publication, we cannot go into a lot of the details of many of the jokes, but there were many highlights that were politically correct enough to describe here.

Jeff Storm who apparently has had several run-ins with Lumpy over weight issues with his race car, brought a lead weight on a chain that he forced Lumpy to wear around his neck all night. At least until it broke and fell to the floor with a loud thud.

Dan Fredrickson, who aside from racing owns a sign printing business made several decals for Lumpy regarding the tires of choice. Fredrickson also made a sign directing racers to go through Lumpy’s tech line. The usual payments were accepted along with Swiss Colony sausages. The kicker to that sign was in telling the visiting NASCAR drivers who may have shall we say questionable equipment to just proceed to the qualifying line and bypassing tech.

Perhaps the star of the evening was Brad Mueller. Mueller would go through more costume changes than Fee Waybill at a Tubes concert.  After every roaster before him was done, he would duck behind the stage only to emerge wearing one of the many uniforms from the various racing series that Lumpy has worked for throughout the years.

“I’ve known Lumpy longer than any of these guys,” said Mueller. “When I found out they were doing this roast I just had to be a part of it.”

Once everyone had taken their shots, it was Lumpy’s turn to strike back against those who had railed on him all evening. Lumpy spared no one, just as those who had their shot at him earlier.